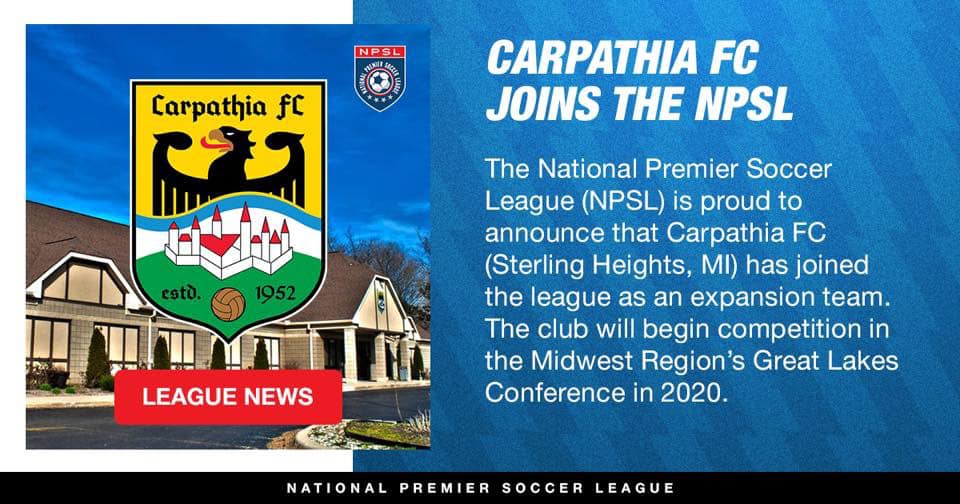 The National Premier Soccer League (NPSL) is proud to announce that Carpathia FC (Sterling
Heights, MI) has joined the league as an expansion team. The club will begin competition in the
Midwest Region’s Great Lakes Conference in 2020.

“Carpathia FC is yet another great addition to the Great Lakes Conference,” NPSL Managing
Director Cindy Spera said. “They have a long history, colorful culture and a loyal following in
their community, trademarks of a successful NPSL organization.  We look forward to seeing
how they grow and thrive under the NPSL brand.”

At the Carpathia Club, Donauschwaben and German cultural heritage continues through sport,
tradition, food, and friendship. Carpathia was established in 1913 as the Carpathia Choir
(Carpathia Singing Society). Since then, the club has grown to include a variety of interests
including dance groups, German school, soccer, sportsmen’s group, brass musicians, ladies’
group, groups for seniors, and still proudly includes the choir that started it all.

The success of the Carpathia soccer program began back in 1962 when the Carpathia Kickers
won the National Amateur Championship. Carpathia FC strives to establish a structured,
consistent soccer program with a positive environment for the continuing development of players
who desire to excel in the sport of soccer.

“The entire process of joining the NPSL has been an exciting journey and something Carpathia
FC is honored to be a part of,” Wilden noted. “The history of the NPSL and the history of the
Carpathia Club seemed to be a perfect fit at a time where we were looking to take the FC team to
the next level. The challenge of joining such a prestigious league is a challenge we are looking
forward to. We will strive to be great examples to the youth teams at the Carpathia Club on and
off the field and use the NPSL platform as goals for the kids to work towards.”

Home matches for Carpathia FC will be played at Avondale High School in Auburn Hills, MI.
The stadium, which features a turf field with lights, provides seating for over 2,000 with convenient access to hotels and highways. This will be Carpathia’s fourth season playing at Avondale HS.

“Carpathia FC has a long history of successful men&#39;s amateur teams,” NPSL Director of
Membership Development Dina Case concluded. “They are poised and ready to grow as a
successful club at the next level. We are pleased that Carpathia has joined the NPSL and expect
them to be a competitive and successful organization for both the Great Lakes Conference and
the league.”